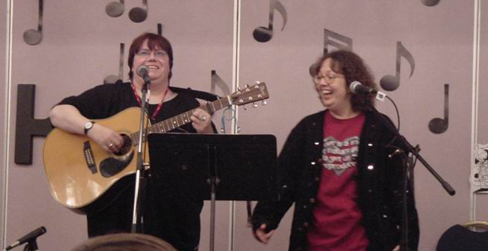 Katy and Ju – A History

All is quiet. The wind wafts through the trees, carrying the scent of Autumn; ice caps on the mountains, and a cold bier in hand just set the stage. Off to the left you can see a cliff, where the Bedrock of Germany is exposed by centuries of movement of teutonic plates (Yes, normally it’s tectonic, but we’re in Germany.)

(What? Oh. Yes, I have my poetic license right here, officer…).

Suddenly, a movement. A cosmic sculptor has taken hammer and chisel to the base of that bedrock… what is he doing? As we look closer… closer… clooooser… we can see him, hunched over his work. What is he doing?

Wait. His purpose was to make GRAFFITI on the.. The Bedrock of Germany?!? As we start to run to the base of the cliff to give him a piece of our minds (oops- watch for that rock there- and that one, too.. wouldn’t do to sprain an ankle *now*- what with the weather so nice and all…)– we see the letters seem to move, and blend together.

And then, flowing from the letters, two forms… on the east side, a figure holding a pen and penny whistle in one hand, and a guitar in the other… and on the west side, another holding a guitar and an accordion (quite a feat, that).

Yes, carved from the very Bedrock of German Filk, Katy and Ju. They seem quite flexible for having been carved…

(allright, you. Your license only allows stretching an idiom so far. Let’s go!)

Wait! I haven’t even begun to… ok. I’ll leave you with the words of the citation from the Filk Hall of Fame, since your Narrator has been suddenly and unfairly *gack*

Katy Dröge & Juliane Honisch have been involved in German filk fandom since 1991. They released the first German filk-tape, “Neofan: Filk from a developing country”, in 1993 and have since produced two further tapes, and two CD’s (Witch Way to Reality (1998) and IV – A View To A Filk (2004) ).

They were among the first German filkers to get in contact with British filk fandom and attend a British filk-con. They were the first Germans to be invited as Interfilk guests, at FilKONtario in 1998; and the first to travel to an American filk con, OVFF, the same year. They were among the organizers of FilkContinental in 1997. Ever since, both have continuously been part of its committee (either officially or unofficially on the sidelines helping out), in various capacities. Ju has served as “chief translator” for FilkContinental and the rest of the filk community, turning witty idiomatic German into equally witty and idiomatic English (and vice versa) for program books, progress reports etc. 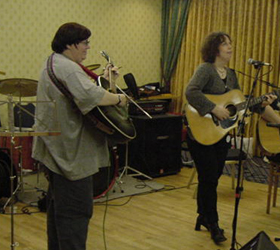 Experiencing one of their performances is like having a whirlwind blowing over your head. Ju lends her haunting and touching tin whistle, guitar-playing, and soprano harmonies to blend with Katy’s skillful guitar and warm and rich alto. They spare no effort in preparing and executing their concert sets and CD projects. 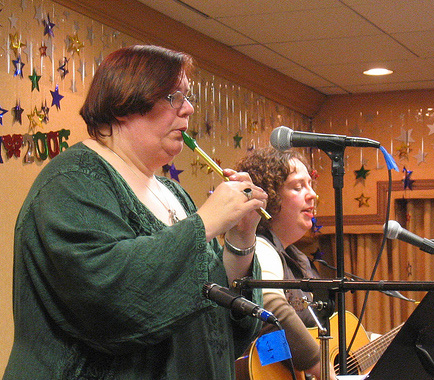 In song-writing, Ju has a stunning creativity and ability to juggle words and make them fall in just the right places to build her beautiful songs. Katy has a sure talent for putting Ju’s words to unforgettable music.

Ju and Katy are true filk gardeners. Katy with her open and easy manner and Ju with her gentle and patient air, are always there to lend a second voice or guitar, make a song sparkle or move people to tears just by adding a flute. Talented and professional, they even make a song sound great when the performing filker slips or loses the melody.

You can find more information about Katy and Ju at their website, www.filk.de/jukaty. We are pleased and proud that Katy and Ju are the first stars of the DFDF constellation!