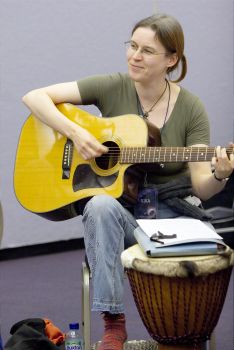 Here’s a bio of Rika:

“I first met Rika Koerte when she travelled through Britain to spend some time on the Isle of Sky, in Scotland, learning harp and Gaelic. She’d put out a general ‘hello’ through the filk.uk board in hopes of meeting and making friends with folk during her journey. Well, I thought, anyone who sets off solo to do that sort of thing must be somebody I’d like to meet, so I put my hand in the air – metaphorically speaking – and invited her to my house. I’ve been thankful ever since that I did that, for it’s been my privilege to have Rika’s company in many aspects of my life since. I could tell you that she’s wonderful to have around when you’re moving house, or feeling low, or feeling happy, or eating croissants, or driving through France, or baking franzbroetchen, but you probably want to hear about her music, don’t you?

Rika possesses a silver-sweet voice, and gathers to herself songs like pearls – strange and compelling things, stories and fables and echoes of the past. She can be self-effacing, the better to surprise us when she shines onstage as she did as GoH at the UK Filk Con, or taking the part of ‘The Girl’ and acting as well as singing in the production of ‘Before the Dawn’.

Rika’s nothing if not eclectic. She can more than hold her own with assorted percussion, tin whistles, guitar and singing… I think of her archetypally as playing her fur-topped djembe, (which has at times been referred to as ‘Ghengis Drum’) and singing of some far-off land in a way that brings it very close. And probably in a language I don’t speak. Although that’s never stopped me enjoying her singing – added to it in fact, as she will often give a précis in her listeners’ language of the lyric she’s just sung, so that one gets the storytelling as well as the singing of it.

Rika has been performing lately with the Millhouse Band – a floating entity at the core of which may be found Rika and Mike Whitaker – creating layered music from a variety of sources and winding guitar lines, vocals and indeed whole songs around each other… like a woven braid, which of course leads me to mention her handicrafting habit – Rika’s craft projects are legion, as are her interests. Her courage is immense; she has survived being hoiked onstage with no preparation on more than one occasion.

I’ll invite you to sit down with Rika at DFDF with a cup of tea (Schwarzer Tee, kein Zucker, bitte!) and invite her to tell you some of her tales. I’m proud and glad to be in some of them, and I hope I’ll get to be in more, as she is in mine, stories and songs both. Ask her about Glastonbury Tor, and the Hunters’ meal we shared of apple, onion, bread and cheese – ask her about her many journeys, her instruments, her interests, her crafts, her songs, her stories, her roleplaying characters. Listen to her. Dance with her. Sing with her. And cherish her, as I do.”