Pavlov’s Duck is a German filk duo based in the proud imperial city of Aachen, consisting of husband-and-wife-team Peredar and Thesilée. Starting off as the remains of once-proud filk group Lord Landless, which split up after real life and geography made it near impossible for the band to come together, Pavlov’s Duck has since proven that they are an equal rather than a sequel: less medi-, but even more evil. They sing songs on almost everything, as long as it’s got death in it, and are delighted to entertain you with their haunted – and haunting – songs at DFDF 2014. 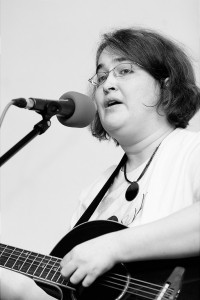 Thesilée, in real life, is a librarian turned free-lance writer. Given the opportunity, she’ll talk about her stories …  and talk … and talk … Raised a folker by her parents, Thesilée was introduced to filk in 1999 by a friend who, intrigued by her stories and songs, gave her the membership for her very first filk con for her birthday, and she has stuck with it ever since. She is a keen singer and guitar player and does most of the songwriting. Also, she loves puns. 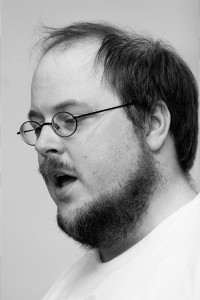 While Thesilée can be somewhat filkhoggish, Peredar is the quiet one. A medical engineer by profession, he is following the long tradition of geeks and scientists in filkdom since he was dragged to his first convention by Thesilée in 2003. Both are role playing enthusiasts and known for their sheer endless trivia. Peredar plays most things that have keys, except for the accordion and the keys in his pockets, and has learnt to stay patient when Thesilée tells him to go »Diddly-daddly diddly-daddly klong klong klong«, instead of writing down notes. He also likes to sing. And puns, too.

Both are avid choir singers and hope to produce some pleasant harmonies for you, to lull you into a state where you won’t mind all the blood dripping from their lyrics. Thesilée loves flirting with disaster, like »Oh, aren’t you a lovely little catastrophe? You wouldn’t mind me writing a song about you, would you?«, and has thus translated songs like The Wreck of the Crash of the Easthill Mining Disaster into German. Expect to hear some new translations on top of their own stuff. Also, soppy love songs, as well as more serious material.

But most of all, expect fun. Watch Thesilée wiggle her eyebrows! Watch Peredar’s solemn face as he stands behind his piano without ever twitching! And feel free to sing along. The lyrics are simple. And if you don’t know them, just go »Death death death death …« – it will most likely fit. If not, include swine fever. Or Oliver Kahn.

Don’t forget to bring your bell! Pavlov’s Duck are looking forward to meeting you at DFDF.