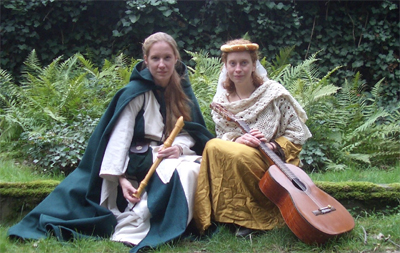 They have a website right here where one can find out more about them – and here’s a wonderful and poetic biography written by word-smith Ju: 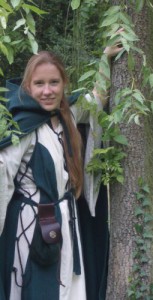 The sun is burning down in the last evening splendour. The Summer Lady’s strawberry hair shines in its rays. A reddish-golden hue comes over the world.

One would imagine her sitting among the roses. Two minds take up her head, two souls share the body, serious and serene and yet lively and full of creative spirit. Like water, words pour from her bardic self, crystal clear, pristine, sometimes sad, always full of meaning, never trite. Her voice rings out like a bell calling people in to listen. There, on the crossroads, words linger and explain the world. It is a world of light and shadow, telling of the fates of lovers and fighters on their many quests through fate – in the real world and beyond. Life is not fair, quests are not easy, battles are not always won. She sings of victory and defeat, of love and loss, of the dread of an inexplicable game, of the consequences of decisions, the pains of growing up to be what one never wished to be, grown-up.

She is a player, a gamer, a singer, a poet, liege lady of the reality on both sides of the mirror.

Among the roses she plays her many instruments with a dextrous hand. So talented. Wood and string have gathered around her like followers, knowing she will make them sound clear and give them purpose. She plainly is familiar with too many of them, almost putting other bards to shame. The box that houses the instruments has nothing of Pandora, is a collection of sound: guitar and piano, recorder and metallophone, bodhrán and glass harmonica – and whatever else comes in handy.

Sometimes, her dark prince joins in, Rafael, adding depth to what is deep already. He is a fighter and a dancer and a singer and a creator of games.

And then again her other soul surfaces and she is no longer among roses but faces the thorns of life to speak justice. She is a criminal judge, sits on the bench and confronts crime and ill-doing. She knows how to do that as well, deals out her judgement with the same sagacity that pervades her lyrics.

There in her heart, her two souls entwine and dance to the spirit of the counterpoint, reality and what is beyond it holding hands in a sometimes melancholy but always beautiful way.

Autumn leaves turn the shade of her hair, a bright fire. She is a small and dainty flame, focused, warming the world with incandescent creativity. Once, she would have been a healer, but she prefers words and songs, dealing them out like a theriac. She wears the old garments of ages gone by as if they proved her irresolvable connection to the time of legends. She is an integral part of those legends, and for all she does in this reality – like translating Russian novels – she always seems to be deeply rooted in that other place. There be dragons – but we like dragons. And if you sail on beyond the rim and past the siren’s calling, you will find her and her music.

You wish to depict her with the ancient Greek gods‘ cornucopia. Among the autumnal fruit and flowers streaming from this source of plenty are instruments, guitar, flute, saxophone, clarinet, mandolin, metallophone, e-bass and probably even more that just linger to still come out quite unexpectedly some day. One might think of double sided harps, foot-played cymbals, mind-strummed psalteries. Those too, she will undoubtedly be able to play – probably without much practising for she is almost annoyingly versatile. All you have to do is sit back and listen in wonder.

Words are her treasure. She has collected them as other people might collect gold and riches. A loot of expressions and expressiveness. One language is not nearly enough. She writes her poems and songs in German and English, in Russian and French, aligning the colour of their sound with the mood she wishes to paint on her harvest canvas. Almost you can imagine her on her September Island where a treasure chest of lyrics is hidden for the music-lovers, the freebooters on the ocean of legends. The journey is exciting, never boring.