He has been haunting Filk since the 80s of the last century (hear hear! and he is only. Although he has a nice bariton voice you will usually hear him as Master of Ceremonies of FilkCONtinental (and by now even at a british Filkcon) – and he will expose you to all kinds of (im)possible jokes and puns.

2001 he got “sentenced for life” as a permanent member of the FilkCONtinental ConCom and he is guilty of “introducing the infamous sung Opening Ceremony“ to that convention. In 2002 Franklin had been Interfilk-Guest at Consonance in San Francisco, 2007 GoH at Harmuni 3 in Cambridge. His greatest moment as a Filker has been, as he says, when at FilKONtario 2006 he had been inducted in the „Filk Hall of Fame“.

His songs and filks are mostly parodies and (in his opinion) funny songs. But occasionally his serious musical talent can be seen when he writes a beautiful ballad or translates on of his favourite filks from English into German. Although he can accompany himself on the piano he usually does „Karaoke-Filk“, as this leaves more room for a performance. He is also known for his “interesting” costumes (just remember his appearance as „Franklin Further“ or „Sailor Moon“).

Together with Alexa he forms the rather rarely seen duo „Lord Mercyless“, he has cooperated with Urban Tapestry, Puzzlebox and his „brother in puns“ Steve McDonald. He also makes music with his wife Molly and his children Fabienne and Frederik, acts at rennaissance fairs as Herold, plays the drum with „Stella Splendens“ and sings with „Cantores Badensis“. He produced his first and so far only CD „Seven of Mine“ for his GoH-Set at Harmuni, but not without adding a declaration of love for his wife.

P.S. Franklins real name is Frank Gunkelmann, but nobody knows and nobody really gives a damn. And why should they? (translated by Jela) 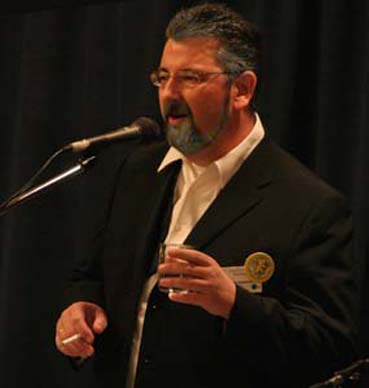