Kirstin has been a member of German filk since its very first moments. When the East-West border in Germany fell, there was nothing that could keep her from joining fannish activities in West Germany. She went to her very first German Star Trek Convention in 1991, and while there also ended up in her very first Filk-Circle … thus also being the first person to bring East German filk music to a convention, and creating united German filk!

Volker, originally, was an innocent  member of FOLLOW  (have a look here for more info about FOLLOW 🙂 ), who made the ‘mistake’ of getting involved with “a filker” (see above) in 1996 and thus was assimilated into German filkdom (Little did he know what he was in for…). Initially he attended filk conventions and surprised everyone with his guitar playing. Before long, he started helping out with stage tech – and soon became the German head convention techie.

Kirstin’s roots are in media and fantasy-based filk, which blossomed in Germany in the 90s. Songs about Babylon 5, Nick Knight, Star Trek, Darkover, and Tolkien were in her repertoire. Some of her most popular songs are collaborations with C.J. Ueberall.

Volker, on the other hand, has quite the hand at creating funny parodies.

Together they are a great package of guitar playing, singing, percussion, and even the occasional alto flute thrown in. 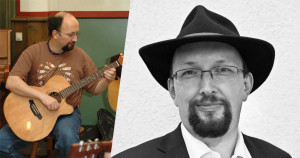 It is impossible to picture German filk without Kirstin and Volker – but musically, they are only heard from rarely, as they are usually too busy doing other things at conventions to actually perform on stage or in the circle. Kirstin is busy with running FilkCONtinental, and Volker can often be found nailed to the tech desk at both FilkCONtinental and DFDF.

Having the two of them as Guests of Honor at DFDF is thus a special pleasure, as we will all be seeing them on stage and getting to hear from them! Come and enjoy! 🙂