Bill and Gretchen Roper are filkers.  Like so many things involving them, the story of how they got there is complex. 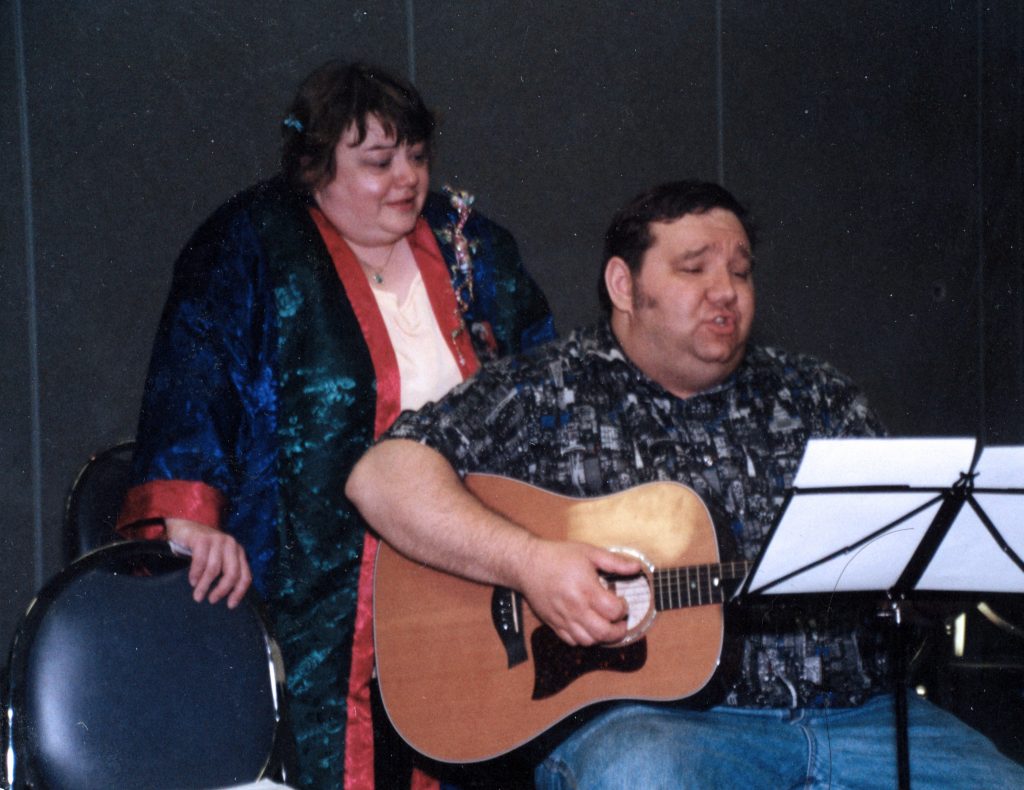 Gretchen got into filking first, growing up in a family where mutilating lyrics was a sport.  Her brother was one of the founding members of General Technics, a fannish group with its own filking tradition that spent a great deal of time sitting around in circles singing funny songs to well-known tunes.  Gretchen gravitated to the group as well.

Bill, meanwhile, went to his first Worldcon in Kansas City in 1976, found himself in a car caravan with Buck, Juanita, and Bruce Coulson, and was led to his first filksing by Bruce, who had gone looking for his mom.  Bill thought this was pretty cool and at his second convention, Chambanacon, a few months later, borrowed a guitar and sang a bad parody of “Gentle on My Mind”.  He has since been forgiven.

Sometime in the next few years, Bill started writing serious or “ose” filk (as in “Ose, ose, and morose”).  He was rather more successful at that than at humor.

Bill and Gretchen met in 1980 when he moved to the Chicago area in pursuit of his third degree.  Gretchen is quoted as saying, “He’s a pompous nit, but he plays the guitar nice.”  Having heard Bill’s song, “The Wind From Rainbow’s End”, one time too many, she wrote the lyrics for “Library Song”, handed them to him, and asked him to set them to music.  Bill said sure and then promptly forgot to take the lyrics home with him.  After a suitable amount of groveling, Gretchen gave him the lyrics again and he (slowly) set them to music, marking their first musical collaboration.

Gretchen shared a hucksters table, The Secret Empire, with a business partner, selling fantasy stuffed animals that Gretchen handmade and assorted stuff.  Unfortunately, the table wasn’t making enough money and she complained to Bill about this.  Rather than simply being sympathetic, Bill noted that one of the local filk dealers was dropping out of the business, so Gretchen could carry filk tapes, which were small and light and had decent margins.

“But, Ropey, I don’t know anything about filk tapes.”

So Bill got a shipment of tapes on consignment and they sold them together at Conclave in 1986.  After the con, Gretchen said, “So what are we going to do next, partner?”

Not too long after that, they noted that the Midwest could sure use a filk producer.  So they morphed The Secret Empire into Dodeka Records and started producing their own filk tapes and, later, CDs.  Running a small filk publishing empire turns out to be a wonderful excuse for Bill to buy cool audio gear and – eventually – they even started producing CDs of Bill (and Gretchen’s!) own music.

Somewhere during this period, they finally figured out that they were much better off being married to each other and did so.  Their friends wondered what had taken them so long.

It was not long after they were married that they were invited as filk guests to a local convention.  “So do you have any duets?” the filk head asked Gretchen.

“Well, then you could write one.”

And so they wrote a duet, “Brain Sludge”.  And then they wrote some more duets, including “My Husband, the Filker”, which won a Pegasus Award for Best Original Humorous Song and “Apology”, which seems to have a certain appeal to married couples, filkish, fannish, and mundane.

(Bill and Gretchen need to write more duets.  But it’s been busy.)

Then there was the time after they were married when Gretchen looked at Bill and said, “If you are too happy to write ose, I can fix that.”

Bill took this warning to heart and has continued to write a suitable number of ose (or just serious) songs.  And love songs.  Because it is important to remember to continue to write love songs after you are married.

Bill and Gretchen have two no-longer-quite-so-little-girls, Katie and Julie, who are becoming singers and songwriters as well.  Katie started it when she came home from kindergarten and announced, “Mrs. Schaefer is sad that she doesn’t have a theme song.  We should write one for her.”  There is now an entire cycle of songs for Katie and Julie’s elementary school teachers, one of which is on Tim Griffin’s list of songs to record for a future album.

The newest member of the Roper household, Ruby the Dog, also sings, but not on key with any known instrument.

Bill and Gretchen keep busy.  And they keep on singing, writing, and selling filk.